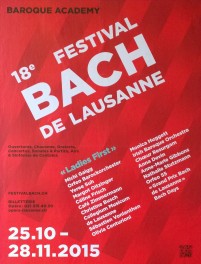 When I last visited the Lausanne Bach Festival many years ago, it consisted of nine concerts over a long weekend. In its current incarnation (the eighteenth), it is spread over the period from 25 October to 28 November, with six concerts, three informal ‘Bach Days’, a short conference, and, on this occasion, the 5th International Organ Competition. Although having the events spread out in this way probably attracts more local residents, it makes it a less practical attraction for people from outside Switzerland. I was principally there to review the Organ Competition (reviewed here), but was also able to get to two of the festival concerts, starting with a performance of Messiah in the Opéra de Lausanne, given by the Irish Baroque Orchestra and the Chœur Resurgam (both founded by the choir’s director Mark Duley), directed by violinist Monica Huggett, the orchestra’s current artistic director. 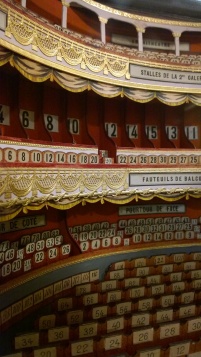 The Opéra de Lausanne (photo shows a model of the interior), despite its name, seems to have an acoustic more appropriate for speech than for music, resulting in a rather subdued and distance aural experience. But this did avoid the bombast of some Messiah interpretations, and pulled the listener into the intimate sound world of the period instruments. In fact, there is some evidence that Handel intended Messiah to be performed as a relatively intimate piece, with a smallish orchestra, at least in the early performances – his subdued opening and sparing use of the two trumpets are possible pointers to this.

The 20-strong Chœur Resurgam were positioned on three sides of the orchestra (on the stage) in a rather curious arrangement which had the sopranos angled towards the audience, but with the basses, on the opposite site, standing at right angles to the audience, singing across the stage. This resulted in a slightly unbalanced sound at times. But, otherwise, the singing of the choir was the highlight of the evening. Resisting any temptation (and, indeed, encouragement) to force their voices into the unhelpful acoustic, they sang with natural and clean voices and with an excellent sense of consort. The four vocal soloists were not drawn from the choir. The tenor and bass soloists Eamonn Mulhall and Brendan Collins impressed, but is was soprano Anna Devin that completely stole the show, not just for the excellence of her voice, but also for the way that she engaged directly with the audience, seeming to address everybody from the stalls to the highest gallery. Unfortunately the mezzo soloist had a degree of uncontrolled vibrato that might have been more appropriate for a later repertoire. 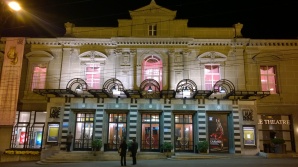 The Dublin-based Irish Baroque Orchestra seemed to be named for their geographical location rather than the country of origin of their international line-up of players. Although it took them a while to settle in (not helped by a few entries that weren’t quite together), their playing was otherwise good, with an excellent trumpet solo from Paul Sharp in The Trumpet shall Sound. The woodwind group of Andreas Helm, Hannah McLaughlin (oboes) and Sally Holman (bassoon) were also impressive. I was a bit surprised to see two violas da gamba listed alongside two cellos – I am not sure if there is any evidence that gambas were used in Messiah.

Monica Huggett is not the easiest directors to watch. Conducting from first violin position, she used her bow to beat time, but only on those occasions when she didn’t need it to actually play her violin. A period violin bow is considerably longer than a conductor’s baton, and has a sharply pointed end. I felt for the violinist sitting next to Huggett as this potentially dangerous weapon was jabbed and waved in her general direction. As it happens, her music desk was the only thing that was hit, with a loud clang, just as darkness was covering the earth. On occasions, Huggett also waved her violin around as well as the bow, looking very silly in the process, but to no apparent effect. Towards the end, she also started leaping to her feet, waving not only her bow but also her fists at her fellow musicians, several times loudly stamping her feet. It was an extraordinary, and rather uncomfortable, spectacle. Judging by the final applause, the audience loved these antics, but I have to say that I didn’t see the point, other than to draw unnecessary attention to the director. The choir and orchestra were singing and playing with sufficient vigour and sensitivity, and encouraging them to overdo things (or, indeed, lapse into violence) would have been unmusical. Fortunately, they didn’t pay any attention to these curious antics and kept excellent control throughout.

Incidentally, for those who care about such things, I only noticed one person standing up for Hallelujah. This curious British habit is based on no evidence at all of what George II might have got up to if he had actually attended any performances of Messiah – of which there is similarly no evidence.