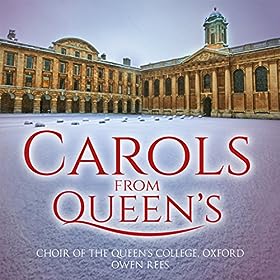 The Queen’s College, Oxford is probably best known in carol singing circles for The Boar’s Head Carol, sung every year as a processional at the start of the centuries-old feast held on the Saturday before Christmas, and known as ‘Gaudy’. But in a delightful mix of well-known and other carols, this CD also reflects other carols and composers connected with The Queen’s College. These include Kenneth Leighton (Lully, lulla, though little tiny child), Herbert Howells (A Spotless Rose, Sing Lullaby), Harold Darke (In the bleak midwinter), Ivor Atkins (The Three Kings), and Reginald Jacques, the latter the compiler (with David Wilcocks) of Carols for Choirs, extracts from which form a key part of this well-chosen programme. Other composers represented include John Tavener (O, do not move, The Lamb), Peter Warlock (Bethlehem Down), and Jonathan Dove (Wellcome, all Wonders in One Sight).

Recorded in the more resonant acoustic of Keeble College Chapel, rather than the smaller Baroque Chapel at the Queen’s College, the 33-strong choir uphold their reputation as one of the finest of the mixed-voice student Oxbridge choirs around. The notes by the choir’s director, Owen Rees, explore the history of the carols that we know today, many of which have comparatively recent histories and roots.