It is pretty certain that the organ in the church of Notre-Dame de l’Assomption in Longueville (southwest of Brussels) was built around 1690, but it is not clear who the organ builder was, although Blasius Bremser is a possibility. It was originally built for the Saint-Martinsdale Priory in Leuven but was moved south to Longueville when the priory was dissolved in 1785, placing it in the Walloon rather than the Flemish province. It has one manual with 12 stops, two of which are divided (in the Spanish fashion) to allow for bass and treble solos. The construction and style are Flemish.

The CD focuses on the music of Peeter Cornet (c1575-1633), with nine of his pieces (covering about half of his known keyboard music), plus one each by Peter Philips, Orlandus Lassus, and Herman Hollanders. Cornet is often overlooked in the remarkable succession of late Renaissance composers that include the likes of Sweelinck, Bull, Phillips, Byrd. His music is firmly in that grand tradition, notably in his complex Fantasias, enormous contrapuntal workings out of a series of themes in the style of the Italian Ricercar. The Netherlands of his time was under the control of the Spanish Hapsburgs, and there are suggestions of Spanish influence in some of Cornet’s pieces, accented on some occasions by organist Joris Verdin with the addition of some very Spanish ornaments of the like of Arauzo. The other major influence is English music of Byrd, Bull and Philips, the latter two residents nearby for at least some of their lives. This merging of style makes for a fascinating compositional style, as represented on this CD. 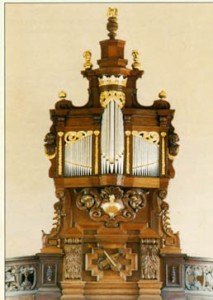 Joris Verdin makes imaginative use of the available stops, including the Trumpet stop, a later addition. His use of ornaments is similarly imaginative, and entirely appropriate to the music of Cornet with its wide range of influences. The organ is tuned in meantone temperament, which makes itself felt on a few occasions. You need a good sense of the underlying pulse and the overall architecture of some of the lengthy pieces, which he certainly demomstrates.