The Tête à Tête Opera Festival at Kings Place included the premiere of a fascinating new one-hour long opera, The Electrictionary, with music by Alexis Bennett, words by Timothy Knapman, and direction by Dominic Gerrard It was performed by four solo singers and the instrumentalists of The Early Music Experiment & guests.  The Electrictionary was conceived by the composer to explore the power of language and the issue of new words. It is intended “to confront progress, pedantry, class, slang and neologisms, in search of the ultimate dictionary with a riotously eclectic score mixing jazz-funk, classical and the avant-garde”. The use of various styles of music aims “to draw parallels between the deep history of words and the similarly complex origins of the multitude of musical styles that surround us every day”.  The orchestra featured baroque specialists (albeit playing modern instruments) alongside jazz/funk musicians, and the wide-ranging structure of the piece included a combination of baroque recitative and aria, the spoken elements of Singspiel, and present-day music theatre and film music.

The piece is set in a totalitarian state (‘any time, any place’) under the control of a ‘Great Leader’, who may or may not be The Editor, the focus of the story. The Editor wakes from a nightmare about an endless stream of new words. Addressing the audience from a central lectern in the manner of a revivalist meeting, he announces the compilation of the ultimate dictionary of some 100 words. Anybody who invents a new word will be punished. The last new word allowed is the name of his project – “The Electrictionary”. The Editor is aided by The Slave, a sweet young woman wearing the sort of headscarf often adopted by fundamentalist Christian woman who, before the show, came and asked me, and others in the audience, whether we were comfortable. She provides him with everything he needs, including having somebody to bully and dominate and copious supplies of drink. 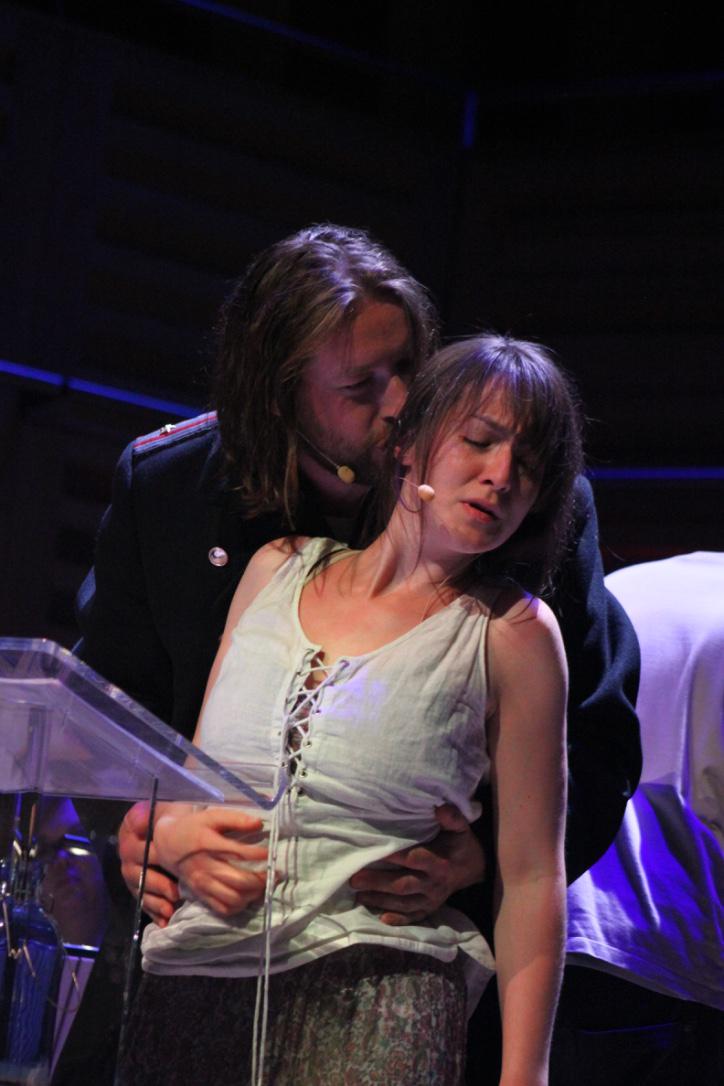 In a search for assistance for his plan, The Poet is dragged onto the stage by The Slave – a broken woman who was an earlier victim of his bullying and who has been shut in a small cell for years after criticizing him. She confronts The Editor’s scheme with the repost “Language is the one thing you cannot kill” and is again rejected. The scenes between the monstrous Editor and these two unfortunate and subservient women are most uncomfortable to watch.

And then comes the sycophantic Sage, cleverly portrayed as the sort of tight, dominating woman found in most offices, who has the sort of overly-wobbly singing voice that her local am-dram group would no doubt have praised as having been ‘trained’.  Keeping the Editor waiting while she changes her shoes and puts her make-up on, she even manages to challenge his use of words (“ ‘infer’ – oh no, I think you mean ‘imply’ ” ). She seems able to control the volatile Editor, and is commissioned to compile the “Electrictionary”.

There then comes a magical moment. As The Editor continues to disintegrate, The Slave gently whispers “Don’t worry, I am here”. Is this the Stockholm Syndrome in action? Or the beginning of a power shift. It is certainly a change in mood, beautifully reflected in Alexis Bennett’s score. After a gentle wordless aria (with a soprano sax providing a distinctly vocal line) the discarded words are literally scattered around the stage to a cacophony of instrumental sound. In another very touching scene, the Editor addresses The Slave, reflecting quietly on his troubled past life. She comforts him and plies him with more drink. Removing her headscarf, she begins to describe her own complex childhood, and the ‘soldiers that came at dawn’. As The Editor collapses, The Slave gently sings “Goodbye Editor … I have removed you … improved you”. The piece finishes with The Slave standing quietly and confidentially at the lectern. The transformation is complete.

The four singers coped extremely well with the technical difficulties of the opera, not least in the way that they managed to subtly refer to scores without making it obvious. Outstanding in the key role of The Editor was Jimmy Holliday, with inspired acting and excellent singing. Also very impressive in a demanding role was Kirby Anne Hall as The Slave, with some delightful singing and fine acting. The Poet was sung by Emily Atkinson, again well-acted, while The Sage was Polly May, cleverly adopting a singing style to suit her role. All four singers were well-cast, with believable personas and intriguing character differences between the three women.

Although several players (and the conductor/composer) are experienced players in the early music/period instrument world, that element was perhaps rather overplayed in the pre-show publicity. With the possible exception of some out-of-sight recorders, there were no period instruments, and little evidence of early music influence, apart from a quasi-continuo role for a digital keyboard and grand piano.  The composer, Alexis Bennett, conducted with a healthy realisation that the key job of conducting this sort of music is to keep a very obvious beat.

An enterprising crowd-funding was set up to fund the production. It continues with the aim of performing the piece in public libraries to secondary school students, to engage young people in local libraries, and raise awareness of the plight of these vital institutions in changing times. The fundraising page is at Fundraising. It is a project worth supporting.

Important as these literary aspects were as the quoted theme of the opera, that wasn’t the issue that most touched me. For me, the key focus of the opera was the rather more important issues of male power and brutality and domination of women, with the morality tale of the disintegration of the brute and the rise in strength of the dominated. To that end, I think it would go down well out of the library context. Both as theatre and as music, it is an impressive piece and would be appreciated by a wide variety of audiences.

The entire performance can be viewed through this link.