Having recently dusted off ‘The Spy’s Choirbook’, a manuscript by Alamire in the British Library, David Skinner and Alamire have now turned their attention to a manuscript that (arguably) belonged to Anne Boleyn, currently in the Royal College of Music (MS1070). The inscription ‘Mistres ABolleyne nowe this’ indicates the link to Anne, the ‘Mistres’ suggesting that the songbook was started before she became Queen in 1533 – and, I suggest, also before she became Marquess of Pembroke in 1532, and possibly before 1525 when her father was elevated to the peerage as a Viscount, or 1529 when he was created an Earl, both ranks giving Anne a courtesy title. ‘Nowe thus’ is her father’s motto. 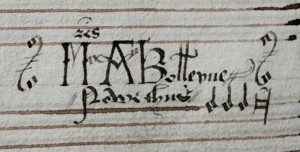 Skinner’s informative and user-friendly chats between the pieces of the concert explained his reasoning that this was indeed Anne’s songbook, not least on the basis of the contents of the book. The suggestion is that the book was started in Anne’s youth, during her time at the court of Margaret of Austria (Governor of the Haspburg Netherlands) in Mechelin, or when she was in the household of the Queen of France. Composers such as Compère, Brumel, Mouton and Josquin were all Franco-Flemish composers that Anne would have been familiar with during these times. A second layer of the book has clear references to later incidents in Anne’s complex life, not least to the early relationship between her and Henry VIII. One such example was the song Jouyssance vous donneray with the words ‘I will give you pleasure, my dear … everything will be good for those who wait’ – there is a suggestion that this is a song that Anne herself sang to Henry – who (we were gleefully told) she apparently pleasured “in the French manner” before their marriage. END_OF_DOCUMENT_TOKEN_TO_BE_REPLACED