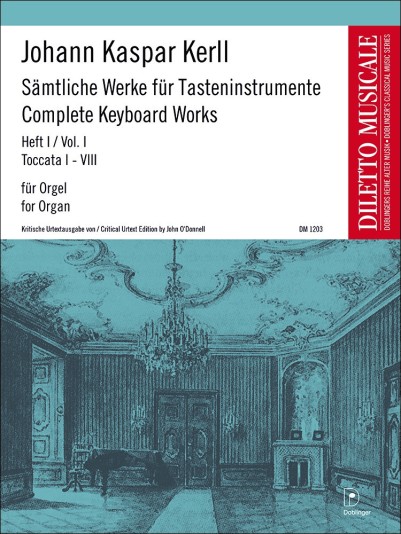 Johann Caspar Kerll was born 1617 in Adorf in the far south of Saxony. Son of an organist, he was sent to Vienna in his early teens to study with the Court Kapellmeister, Giovanni Valentini. He was soon noticed in Court circles and when he was about 20 years-old was sent to Brussels by the Hapsburg governor of the Spanish Netherlands as organist for the new palace. Over the next 10 years, he combined his Brussels post with musical travels, including studying in Italy with Carissimi where he probably met Froberger and might have studied with him. He also spent time back in Vienna, in Dresden, and Moravia, eventually becoming Court Kapellmeister in Dresden in 1656. He returned to Vienna in 1674, where he might have been a teacher of Pachelbel, then deputy organist at the Stephensdom. He is one of those unfortunate composers many of whose works have been lost, including eleven operas. He is best known now for his keyboard music, and this first volume of his organ works, consisting of 8 Toccatas,  demonstrates why.

These eight Toccatas were probably composed between 1650 and 1676. Very few of them were published until the discovery in the 1960s of three important sources, followed by further discoveries since. Seven of the eight Toccatas appear in a Munich manuscript, with concordances in other manuscripts, which currently number in excess of 30. A number of other Toccatas are omitted as they are considered spurious. First published in 1993, it now appears in the smart new Doblinger house covers.

The influence of Frescobaldi and Froberger are strong, as is the case in much music of Southern Germany during this period. Performers would do well to study Frescobaldi’s instructions on how to play Toccatas, as the same focus on rhythmic freedom and expression apply to Froberger. Most are in the influential 17th-century Stylus Phantasticus idiom, with different sections represented different moods – rather like a mini-opera. They are relatively short, with only one extended to more than four pages. Most of the pieces are suitable for organ and harpsichord performances, although two are clearly for organ, one through the need for pedals (which were likely to have been pull-downs, without independent stops) and one marked specifically as Cromatica con durezze e ligature in the style of an Elevation Toccata. Informed performance raises a number of issues, not least speeds (most include passages in demisemiquavers/32nd notes), and one ventures into hemidemisemiquavers/64th notes), articulation, and how to approach the topic of rhythmic flexibility.

The notes to the edition (in German and English) focus on sources, and seem to apply to all the keyboard volumes, rather than just this first volume, with detailed notes on some pieces from later volumes, but no detail on the pieces in this edition. The critical commentary is in German only.