For reasons that will become apparent, this is more than just a review of an opera.

Grange Park Opera has been one of the UK’s musical successes since it first set up shop in 1998 in the derelict shell of The Grange, a country house in the centre of Hampshire. Owned by the Baring banking family, The Grange dates from the early nineteenth century when William Wilkins, architect of the British Museum, transformed an earlier 17th century brick building into Britain’s most important example of the Greek revival architecture, notable for its imposing temple-style portico. It was saved from demolition in 1975 after a public outcry and the intervention of the Government, who spot-listed the exterior shell of the building, in recognition of its important as a landscape feature. English Heritage took over custodianship of the building, although the ownership remained with the Baring family.

Over the years since 1998, Grange Park Opera have invested vast amount of (private) money into transforming The Grange, funding and building an award-winning opera house within the shell of the former orangery and carrying out major improvements to the estate and the main house, including replacing the main staircase, sold by the Baring family in 1972. Their summer opera season quickly built an international reputation for the quality of the music and performances. But, as their founding chairman writes in this season’s programme book, “In 2014 we were informed by our landlords … that unless certain conditions were met, they would not renew the lease due to expire in 2018”. Those conditions were that “Grange Park Opera Endowment Fund be dissolved and merged with Grange Park Opera” and that “they appoint a new chair, new trustees and a new chief executive”, thereby effectively handing control of Grange Park Opera to the Baring family.

Such conditions would have been “completely against Charity Commission guidelines” but despite attempted negotiations, the Baring family decided to terminate the lease two years early, meaning that they would gain control of the new opera house and benefit from all the improvements made to the house and estate by Grange Park Opera. They plan to set up their own opera company, using the facilities provided and funded by Grange Park Opera.

And so, 2016 became the last season for Grange Park Opera at The Grange. But, as from next year, they will move to a new home in a new opera house being built in the grounds of West Horsley Place, a 15th century house much closer to London and within a mile of a railway station. The home of the author and television presenter Bamber Gascoigne who, to his surprise, inherited it from his great-aunt, Mary, Duchess of Roxburghe, the house and estate are now in trust as the focus of a centre for crafts and the performing arts. A major fund-raising exercise is now in place to raise the required £10 million for the new Theatre in the Woods.

As a addition to their 2016 season of Oliver!, La Fanciulla del West, and Don Carlo, they added two performances of Wagner’s Tristan & Isolde to close their 18 year tenure at The Grange, with the aim of making Isolde’s concluding love song of death (the Liebestod) their final musical swansong. 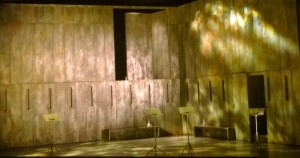 Billed as a ‘concert performance’, they made very effective use of the stage set for Don Carlo, two angled walls with attached benches and an elevated platform on one side that acted as the ships masthead at the opening. The walls parted on one occasion to allow King Marke’s supporters through at the end of Act 1. Apart from that, the only props were a drinks casket and goblet. There were four music stands at the front of the stage, unfortunately blocking some of the views of the singers. They were only used by some of the minor roles and could have been moved aside when not in use. The main protagonists sang completely from memory – an impressive feat in itself.

There was no director credited, so I assume the excellent interaction between the singers was arranged themselves. This was excellent, and brought a compelling sense of the interactions that s normal concert performance would have missed. Particularly

impressive at this were Bryan Register and Rachel Nicholls (pictured) as Tristan & Isolde. Compared to the recent English National Opera Tristan at The Coliseum (reviewed here), where this tale of ultimate passion was delivered with an almost complete lack of physical passion, these lovers had several passionate clinches and presented a touching togetherness. Also excellent, vocally and in acting ability, were Sara Fulgoni and Stephen Gadd as Brangäne and Kurwenal, and Mats Almgren as König Marke. Vocally this was excellent, with all the roles impressing, although I particularly liked Rachel Nicholls and Sara Fulgoni. I have no idea where Mats Almgren’s voice was coming from within his body, but his stentorian and sepulchral tones created a strong aural image.

What was so impressive about this performance was that it was possible to be drawn into the music without the interference, as it so often is, of a director interpretation. The simple staging allowed each of us to be drawn into each character. Rather than having all the singers sitting on stage, only those involved were present, the ones not actually singing usually just standing or sitting, without having to put themselves through all sorts of antics, as directors often impose on their singers. It also helped that the comparatively small auditorium meant that singers did not have to force their voices, all making themselves perfectly clear above the sound of the pit orchestra.

Martyn Brabbins directed the Bournemouth Symphony Orchestra convincingly, expertly controlling the volume and the repeated build-ups of tension, retaining the blast of full orchestra for when it was really appropriate. Holly Randall was the excellent cor anglais player in the extended Act 3 solos.

Given the high production standards of Grange Park Opera’s usually performances, this simple production of one of the most complex works in opera was a refreshing and poignant end to their sojourn at The Grange. More information about the future in the Theatre in the Woods at West Horsley Place can be found here.

The evening was preceded by Primary Robins, a delightful event for schoolchildren, reviewed here.