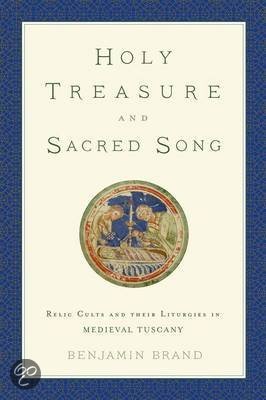 The first three chapters reveal the world of the medieval bishops as ‘lords and builders’, later to become defenders of the holy treasures that their predecessors had amassed in their cathedrals against Scandinavian and Magyar invasionsand, ultimately, to find their power largely overcome by the rise of ‘civic religion’. The apparent possession of a relic was clearly a powerful tool in the power of a local bishop, even if the relic in question was the remains of a previous incumbant. The rise in the power of cathedral chapters and secular laymen led to reforms in liturgy and in the power structure of churches and cathedrals. Arezzo, Fiesole, and Florence are quoted as examples, set within the changing international political power from the Carolingians to the Ottonians and a greater allegiance to Rome.

Later chapters explore the development of rituals and liturgies of the Word and the Eucharist (the former generally dominated by the chapter, the latter by the bishop) and the increasing involvement of the lay public. The increasing collection of rituals in written form was inevitable, given the increasing practice of the clergy hiring others to undertake their duties. Cathedral rebuilds or enlargements, chapter reforms, or the translation of relics seems to have been the starting point for the composition of new offices, and the book concludes with examples of these divine offices from Florence (for the feasts of Saints Minias and Zenobius), Lucca (Saints Fridian and Regulus), and Arezzo (Saint Donatus).

The book has several black and white photographs of the churches mentioned, together with musical examples. Although perhaps rather dense for the casual reader, there is much here to energise the musicologist and anybody interested in the development of church liturgy and music.