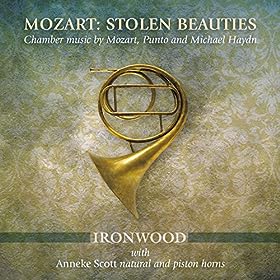 A CD launch concert in Handel’s own parish church of St George, Hanover Square featured the programme from the CD ‘Mozart: Stolen Beauties’. Ironwood is an Australian period instrument ensemble formed in 2006. They were joined by the distinguished horn player Anneke Scott, here playing both natural (or ‘hand’) and piston horn.

The ‘beauty’ that wasn’t stolen was the concluding Mozart Quintet for horn and strings in E-flat (K407). The autograph of this work was last known of in London 1847 when it appeared at a sale. It had earlier also proved elusive when Constanze explained to a potential publisher that the horn player Joseph Leitgeb had the score, but that he ‘lived in the suburbs’ of Vienna and would therefore be ‘difficult to track down’. The horn is accompanied by the unusual formation of violin, two violas and cello, rather than with two violins. This gives a richly sonorous timbre to the work, which Mozart (himself a viola player) used to highlight the key violin contributions. The horn writing is virtuosic, using the full range of the instrument of the day.

Most of the rest of the programme concentrated on the ‘stolen beauties’, with pieces by Mozart expropriated by other horn players and composers. Key amongst those was Barham Livius, probably best known for diddling Weber out of his fee for a London performance of Der Freischűtz. His Concertante for piano, horn, viola and cello is an arrangement of Mozart’s ‘Kegelstatt’ Trio in E flat, the latter scored for clarinet, viola and piano. With the original clarinet part divided between the horn and cello, there are increasing elements of re-composition as the work progresses. For this piece, Anneke Scott played an interesting example of an early piston horn (from the Horniman Museum collection), essentially a natural hand horn with the addition of two valves. The mixed playing technique typical of this transitional stage combined the hand horn technique with the emerging use of valves.

The most obvious and startling example of borrowing came with the opening piece, the anonymous Air varié pour corno dating from 1845. An almost symphonic opening sequence full of suspense and with hints of an emerging grand theme suddenly bursts into the well-known Mozart aria ‘Là ci darem la mano’ from Don Giovanni. A series of dramatic variations showed the sheer virtuosity of Anneke Scott’s horn playing to good effect, notable with the distinctive colours of the natural horn, with many notes missing from the available harmonic series having to be achieved by positioning the hand in the bell of the instrument.

Michael Haydn’s Romance for horn and strings in A flat seems to have been more of a borrowing than a stealing of the slow movement of Mozart’s Horn Concerto in E-flat (KV447). It is possibly an example of the sharing of work between the two friends. In contrast to the other more substantial pieces, we also heard three little duos from Giovanni Punto, originally for bassoon and cello, played here by horn and cello (Daniel Yeadon).

The concert, given to an impressively large and enthusiastic audience, was enlivened by some well-chosen explanations and demonstrations by Anneke Scott.