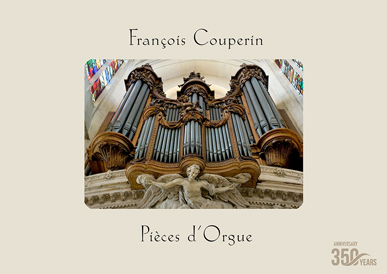 François Couperin is one of those composers that is well-known to organists, although many of them will not know much about his non-organ compositions. He is also known to many non-organist music lovers, although many of them will not know much about his organ music. Like many organist-composers, Couperin’s organ works were published very early in his musical career, before his move into court circles and a compositional career mostly devoted to harpsichord, chamber and sacred vocal music. His father, Charles, was organist at the church of Saint-Gervais in Paris, just north of the Île de la Cité and the river Seine, where he had succeeded his brother Louis, the founder of the Couperin musical dynasty and a distinguished composer and performer. Charles died when François was about 11, specifying François as his successor. As Jon Baxendale discusses in his excellent Background Notes, this was the result of the practice of survivance, where an organist was able to specify his own successor, leading to such ‘family business’ situations. In the case of the Couperin family, the role remained in the family well into the 19th-century. François formally succeeded to the post when he reached the age of 18, the intervening years being taken up by increasingly intense training for his forthcoming role, during which he was paid a proportion of the stipend by the church authorities.

François Couperin was born 10 November 1668, and this 350th anniversary year is an apt moment for a new critical edition of his Pieces d’orgue. This collection of liturgical organ works dates from 1690, when he was 22. It consists of two Mass settings, with examples of the organ pieces that would have been played during the Latin Mass, most of them to be played in alternatim with the choir. One setting is intended for use in parish churches (à l’usage ordinaire des Paroisses Pour les Fêtes Solemnelles), the second for convents or abbey churches (Convents de Religieux et Religieuses). The latter setting is less complex than the first, and was written for a smaller organ, an indication that musical standards would have been higher in the parish churches, with a professional organist, than in the convents where the organ was played by one of the inmates.

The background notes (in English and French) explore the background to the composition, existing and lost source material, and performance practice including ornamentation, registration and a brave attempt at explaining the all-important concept of notes inégales an aspect of rhythmic flexibility that is key to performance. The specification of the Saint-Gervais organ is included in its 1714 four-manual state – it was later enlarged to five manual, with the addition of a Bombarde division. As well as representing Couperin’s own organ at the time of composition, it also acts as an example of a classic French organ in an important Parish or city church. There is also a conjectural two-manual specification suitable for the Messe pour les Convents. The appropriate chant settings are also included, allowing for performance within a liturgical context. Detailed information about registrations includes tables of comparative examples for each separate piece, including comments from the period on the appropriate playing style for each registration. One performance aspect that isn’t discussed (or one that I have missed) is the very large left-hand stretches in some of the pieces.

One of the reasons this new critical edition is so important is that includes a serious look at the sources, a major issue with the Pieces d’orgue. The music was only ever published in manuscript, leading to several issues of authority and accuracy. There is only one surviving copy of the original, so secondary sources become important as a check against inaccuracies. There are four known sources and two that are lost. Included in the Notes is a useful flowchart showing the possible links between the various sources. At the back of the volume is a lengthy list of all the textural differences.

The print is clear, although it is not as large as some modern organ music editions. From a practical point of view, I only have two slight concerns about this edition. One is that the paper appears to be rather absorbent, so might not be quite so immune from the sorts of incidents that can wreak havoc with music, not least damp. But it is matt and non-reflective, which can be a problem with glossy paper. The other concern is the layout of the music on the page. There is a larger margin on the outside edge of the page than at the inner binding edge, with the result that, on organ music desk, the music tends to fold into the shadow of the centrefold, as shown in the image below. Repeated bending of the spine will probably solve this, but at some possible risk to the stability of the spine. As can be seen from the example page, in the alternatim verses, the relevant chant is included, in chant notation, before each piece. You can also see an example of an editorial intervention, here showing an alternative reading of a passage.

A few of the pieces with pedal plainchant include an additional version with the pedal part put into a separate stave. Only in the two double pedal pieces is this really needed – for example, the Sanctus of the Parish Mass where the two pedal parts are to be played an octave lower which can be confusing in two-stave format. I personally find it much easier to play the tenor pedal line in, for example, the opening Plein chant du premier Kyrie, en taille, from a two-stave format rather than with the pedal put into a third stave.

This is an important addition to the organ literature. You can find the excellent background notes here. Even if you don’t invest in the edition itself (which, of course, you should), they are well worth reading. The advertised price on the Norwegian publisher’s website (here) is 433.69 NOK, but I understand that this includes VAT which is removed later in the ordering process, making it 25% less. Postage from Norway is extra. It is also advertised (here) at €38, £34, or $45 plus P&P but those prices might depend on exchange rates. The same link also takes you to example pages.